Welcome to my stop on the Parkland Speaks blog tour. Below you will find a short synopsis of the book and then my thoughts on it. Enjoy! 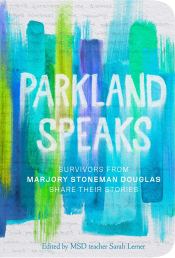 The students of Marjory Stoneman Douglas High School share their emotional journeys that began on February 14, 2018, and continue today. This revealing and unfiltered look at teens living in the wake of tragedy is a poignant representation of grief, anger, determination, healing, and hope.

The intimate collection includes poetry, eyewitness accounts, letters, speeches, journal entries, drawings, and photographs from the events of February 14 and its aftermath. Full of heartbreaking loss, a rally cry for change, and hope for a safe future, these artistic pieces will inspire readers to reflect on their own lives and the importance of valuing and protecting the ones you love.

Parkland Speaks took me a while to get through.

I’ve always found myself extremely sensitive to gun violence and mass shootings. They aren’t something that is a blip on my radar; I think about them constantly in the days, weeks, months, and years after they happen. It feels like a responsibility to not forget the grief I feel when I first learn of these mass shootings. I don’t want to forget. I don’t want to become desensitized. I want the pain to be present in the aftermath because it pushes me to keep demanding change and to not forget about those who have no choice but to remember for the rest of their lives.

So, Parkland Speaks took me a while to get through because I had to keep putting it down. I cried over eyewitness accounts, letters, poems, speeches, drawings, and photographs for what felt like hours.

I’ve never cried over a poem in my entire life until I read Hayden Korr’s Black Bullets, which was a follow up to a poem she presented in third period on February 14, called Rainbow. Black Bullets was written three days later and tore my heart out, but ended with the most beautiful description of hope.

There are countless poems throughout the book that focus on everything from the time before the shooting, during the shooting, and the aftermath of it. There are eyewitness accounts from students who hid in closets. Students who were escorted out by SWAT through halls where their dead peers laid. There are testimonies from teachers who had to make the decision to close a door and not open it for anyone in order to save the students in their classroom. And from teachers who had to figure out how to help their students heal and face their grief.

Parkland was different because it was one of the first mass shootings where the world was brought into the classroom through the countless videos and live updates. We all saw the blood. The smoke. We heard the bullets. The screams. We read the final tweets and the “I love you” texts.

Then we all watched those students run out of those buildings and hug their friends and families. And then we watched as they immediately turned around and demanded change from our government amidst their grief. I look at my own peers and I look at this younger generation, the Parkland generation, and the hope I have for my country’s future bursts in my chest.

Parkland Speaks is unflinching in its honesty and forces you to see the reality of gun violence and mass shootings, which is something MSD students and staff have done fiercely since February 14, 2018. I am so proud of every single one of them.

Disclaimer: An ARC of Parkland Speaks: Survivors from Marjory Stoneman Douglas Share Their Stories was sent to me by Random House to review for the Parkland Speaks blog tour.