Hello and welcome to my stop on the XL blog tour. XL by Scott Brown will be released on March 26, 2019. Below you will find a short synopsis of the book, and then my thoughts on it. Enjoy! 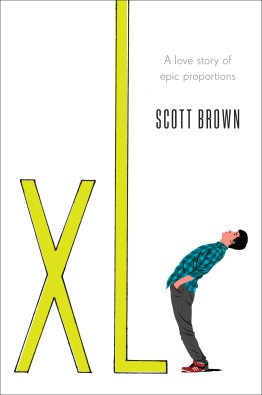 Will Daughtry is a late bloomer–at least that’s what everyone tells the high school sophomore, who is just shy of five feet. By his sixteenth birthday, Will is resigned, bitterly, to being tiny forever. His only comfort is his best friend and stepbrother, Drew (6’3″), and their pal Monica (5’10”), the girl Will’s secretly pined for since fifth grade. With them, he feels whole; everyone else sees him as a half man. But when Will stumbles onto Drew and Monica kissing, he realizes he’s on his own.

That’s when he starts to grow. And grow fast. Astonishingly fast.

For the first time in his life, Will is happy with his height, and with himself. He can barely keep up with the new possibilities that are opening up to him: sports come naturally, girls are throwing themselves his way. But as his growth spurt shows no signs of slowing, it starts to affect his relationships with Drew and Monica, the people who’ve meant the most to him. Now Will has to figure out what to do with himself–and all of this new “himself” he never expected to have.

XL by Scott Brown is a lighthearted look into the awkwardness of being a teenager and navigating relationships and friendships. I enjoyed every second of it.

I was quite surprised just how much I loved XL. I knew I would like it, otherwise I wouldn’t have agreed to participate in this blog tour, but I didn’t know it would become one of my favorite books. The story itself is a unique one: guy under 5 feet tall suddenly starts growing–and doesn’t stop.

I expected it to be funny and put me on an adventure I’ve never gone on. What I didn’t expect was the sometimes painfully honest depictions of what it’s like being a teenager. I didn’t expect to be on the edge of my seat trying to figure out a mystery. And I sure as hell didn’t expect to be engrossed in the day to day lives of a couple of gorillas.

Early on into XL, I noticed there were a lot of Lord of The Rings references. I was worried those might come into play later and would go completely over my head, but thankfully most of the references were pretty basic and the average person would understand. And even if you don’t, it won’t hinder your understanding of the plot. Same goes for all the basketball and biology talk throughout the book. All of that went over my head for the most part, but it didn’t affect my understanding of where the story was going and the heart of it.

As far as characters go, I found flaws within all three of our main characters, which made them all the more real and relatable. The only character I wish we saw more of was Monica. I quickly grasped onto what sort of people Will and Drew were. Will because he’s our main character and the story is told from his point of view, and Drew because Will spent a lot of time speaking with him. I didn’t get a good primary grasp of who Monica was; I mostly gathered who she was from Will’s point of view. Don’t get me wrong, I like Monica–what we do see from her is iconic and funny and real. I just wish we got more from her.

Aside from Will, Monica, and Drew, my favorite character was easily Magic Mike, the gorilla. I would love a sequel to XL if only to see how Magic Mike is doing. He had Will’s back in some of the most intense situations, and Will had his. And he was just kind of a sweetie… Aside from that one moment where he (purposefully or accidentally, we may never know) does that insane thing that I won’t spoil here.

XL was a super fun book to read. There were so many elements that I would never think could work together, that worked perfectly. It was funny, and honest, and I highly recommend it.

Disclaimer: An ARC of XL was sent to me by Penguin Random House to review for the XL blog tour.

One thought on “Blog Tour | XL by Scott Brown”